Southwest Minnesota = Torando!  Northwest Minnestoa = Blizzard!
Crazy day on March 31st, 2014...bringing tornadoes to Minnesota before many of the typical "tornado alley" states to the south this year.  I am used to seeing this type of system in the early spring...a Low pressure bringing a Blizzard to the North and tornadic storms near the Low in the warm/moist air.. (Of course, there's much more behind the science of it).  But to see it ALL happen in Minnesota this time of year is a little out of character.

On Saturday, after presenting with Peggy at the Saline County Severe Weather Symposium in Nebraska (great fun!  awesome people!), I heard there was a Blizzard coming to MN Monday....but nothing about tornadoes.  I had a long drive ahead of me to get back to Elk River, MN so I decided to leave early Sunday and beat the blizzard.  Sunday night I noticed the Low pressure was projected to move across SW MN up toward Minneapolis.  Anytime I see a LOW coming through in the Spring/Summer I get a little excited...this means potential for storms!  It still seemed a little cold and dry for good tornadic storms to develop though.  But, my gut said "HMMM...maybe some good storms near that Low tomorrow (not to the North in the blizzard of course...).

Monday morning I decided to surf the web looking for interesting jobs...maybe something weather related?  Then I saw a post that SPC put up a 2% Tornado risk for SW MN in a small area (but no slight risk)....as the Low moved over the area.  Hmmm....just as I was thinking...  So I started looking at data (before seeing this, I didn't bother).  Time to check out surface obs and some HRRR model runs.  Hmm...looking ok!  Dewpoints are getting to be on the verge of just enough for some severe (just over 50 in a couple spots in SW MN).  A little sun and warming bringing a narrow corridor of instability to the area.  Conditions looking decent for Low Topped Supercells and possible brief tornadoes.  YES, DO IT!  I didn't pour over the numbers too long before my gut said YES!  And this wasn't about SDS or the long, cold, icy, snowy winter we've endured (ok, maybe a little).

I grabbed the cameras, chargers, inverter and extension cord and hit the road by 1:00pm.  I left the laptop at home for this one.  I relied on the good ol' smartphone.  Yep, I love the smartphone apps.  I can easily see radar and my blip (look, there I am!) on the map without setting up the clunky laptop.  Besides, the cameras took up the passenger seat.

I cruised out towards the Marshall area.  The 20Z SPC outlook maintained the 2% TOR risk.  HRRR runs were consistent.  I was pretty sure I was going to see something interesting.  And yes, indeed...at 3:45ish CDT a TCu (towering Cumulus) appeared just East of Marshall.  It quickly took on a nice look...with fairly low base (considering the limited moisture) and nice anvil.  Initiation!! I debated whether to stay and watch or move further East to the mature storm (more intense on radar) just West of Marshall.  I decided to stay and watch.  And I don't regret it!  Although, I did miss the brief tornado near St. Leo on the other storm (unfortunately caused some damage to farm properties, no injuries though).  But I liked my storm...yes, I'm calling it "my storm", LOL!  It was cute and packed a punch for a little thing.  Nice structure, strong inflow winds, a brief funnel overhead and even some mushy hail.  I didn't get the hail on video but I did drive through it :-)﻿﻿﻿﻿﻿﻿﻿﻿﻿
﻿﻿﻿
After "my storm" seemed to weaken as it was getting wrapped up into the Low, into the colder air to the North, I intercepted the still Tornado warned cell near Montevideo.  Tornado sirens were blaring as I entered the town but the storm looked a little unraveled, messy, not so organized anymore...for it too was moving North...into the Blizzard!  A funnel was reported by law enforcement just North of the Montevideo area but I didn't see anything...contrast was low.  I quickly decided it was time to end the chase and head East back towards home.  Along the way I was happy to have more photo ops with the setting sun.  The sun lit the towering Cu/ storms out to the East very nicely and reflected beautifully off a frozen lake as two geese wandered around wondering where the water was.  They were re-considering their decision to migrate back to MN this early.  Don't you know?  It doesn't really warm up here until late May (if we're lucky!).
﻿ 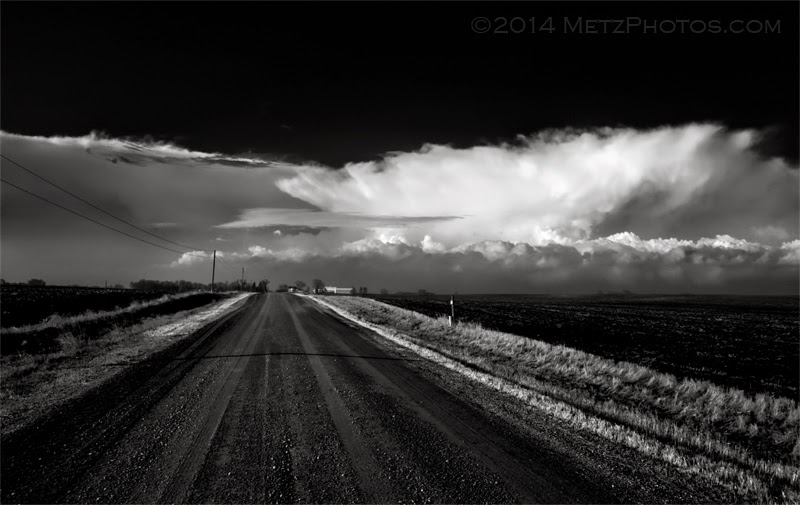 So, it's official, the storm chase season of 2014 has begun for the Twister Sisters!  Looking forward to an exciting season.  Have fun, live for what you love and stay safe!  The video from this chase is at the bottom of the blog...just a couple minutes...a little taste of bigger weather to come!
~Melanie Metz
﻿﻿